The rules for this year’s list are simple. One album allowed per artist. Only albums I can see myself playing in the future and/or have an effect on myself or music as a whole. Only albums from January 1st – December 31st.

Of all of the albums released this year, one stuck out to me more than some others; that being Lil Peep’s debut and final non-posthumous album release from Lil Peep. With Lil Peep’s recent passing I figured putting him on this list as my honorary mention would be the most justifiable. Come Over When You’re Sober, Pt.1 is Lil Peep at his best and was just a sample of what could’ve come from the 21-year-old. His work with emo rap helped revive the emo genre and shed some new light on the outdated and forgotten style. Lil Peep’s personality of a loving boy who’s been mistreated and hurt by people he thought loved him resonated a lot with me along with his fairly huge fanbase he accumulated in such a short amount of time. This album has a song and style for almost everyone; songs like “Benz Truck” and “The Brightside” show two completely different perspectives of Lil Peep and add a commendable contrast in style. Although I was a big fan of Lil Peep and his untimely passing affected myself along with his fan base, however, I am glad he released Come Over When You’re Sober, Pt.1 so his debut album could live on indefinitely, thus solidifying his legacy.

IDK put out an explosive album this year with IWASVERYBAD, and I must commend him for his work. From start to finish this album explores IDK’s flow and talent as he rips through each song. IDK’s voice and execution is the most distinct factor that sets this album apart from much of today’s current rap music. This album is solid and is filled with many names such as MF DOOM, Swizz Beatz, and Chief Keef. Songs like “Pizza Shop” and “17 Wit a 38” offer a refreshing style that is sure to go a long way if continued. If IDK keeps up this work and continues to surprise his fans, I believe he will become a big name within the next few years. I highly recommend this album and this artist especially his older work under the moniker of Jay IDK.

This year seems to be full of surprises from debut albums and At What Cost is a testament to that statement. DMV rapper Goldlink shines through on his debut album as his groove and flow follow him. This album is silky and smooth as Goldlink manages to effortlessly slide through each song with his incomparable style, giving each song a new layer of depth in the process. Songs like “Herside Story”, “We Will Never Die”, and “Crew” are the climax of Goldlink’s style and sound as they contribute the most singularity to this project. Additionally, being filled with features from artists such as Jazmine Sullivan, Shy Glizzy, and Wale solidifies the fact this album was created to be as polished as possible. Given that this is just his debut album, I think the 2015 XXL Freshman has a shot at success ahead of him as he continues to stroll on each song on At What Cost. 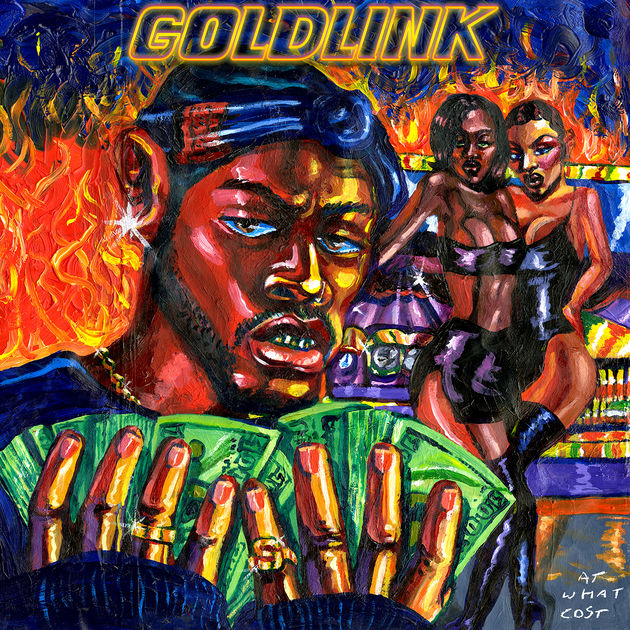 Pure Comedy is without a doubt a masterpiece. Father John Misty invokes thought and emotion unlike any other current artist today. His gloomy yet seemingly positive outlook on life is beautiful as each lyric tell a story within themselves. Father John Misty’s unique indie-folk sound works wonders with his narrative and soothing yet powerful voice and lyrics about life, death, and everything in between. This album is an experience, to say the least; and songs like “Pure Comedy”, “Ballad of the Dying Man”, and “Birdie” need to be heard. I find it hard to talk about this album from a critical and informative standpoint because of how necessary it is to listen to. I absolutely recommend Pure Comedy to anyone reading this and especially anyone who loves the folk sound.

For Tyler, the Creator this album is balanced, to say the least. Tyler, the Creator comes alive with an authentic humanistic approach and appropriate beats to match. Tyler finds the perfect balance of loud and quiet on this album that he has been seeking since Wolf back in 2013. Tyler’s contrasting sounds finally come to be harmonious in Flower Boy for the first time. This album by Tyler is truthful and deep, as he explores missed opportunities, especially love. The journey from Goblin to Flower Boy has been quite extraordinary as Tyler has had time to delve into different genres and sounds each becoming more cohesive with time. This album is easily Tyler’s greatest release to date and boasts a plethora of features which only further endorse Tyler’s balanced sound. If Tyler, the Creator continues to perfect his balance of sound, the future seems bright for the Odd Future founder.

Sampha somehow did it again and released another great project. Not since his 2013 EP Dual has Sampha released a project, but Process was worth the 4-year wait. With “Timmy’s Prayer” being one of my favorite releases of 2016 I couldn’t wait to see what Sampha had in store. Process is the culmination of Sampha’s feelings and time over the 4-year gap, and it couldn’t be any better. This album hits hard and can make the toughest shed a tear as Sampha is brutally honest about himself and life in the most symphonic way possible. The piano was seemingly made to compliment Sampha’s unique voice and projection as the two combine to make truly flawless pieces. It’s safe to say that I would wait any amount of time to hear Sampha release another project that could rival Process.

2017 was the year of collaborations with at least four albums paired some of the best current names in the industry. Of the profuse amount of releases, the one that stands out the most is 21 Savage and Offset’s Without Warning. Without Warning is the most volatile of the collaboration’s released in 2017 and for good reason. 21 Savage has had an amazing year with his debut album and numerous of features that topped the charts, meanwhile, Offset had a prolific year with the Migos debut album as well as his own personal life and relationship with Cardi B. This pairing, however, isn’t an obvious choice as the duo haven’t put out as much work with each other, but nonetheless they make it sound as if they’ve been working together for years. With production being handled by Metro Boomin and sprinkled with some features by Quavo and Travis Scott, this album is the recipe for success. While songs like “Rap Saved Me” and “Ghostface Killers” display the duo’s synergy, yet songs like “Ric Flair Drip” and “Run Up the Racks” show their individual talent on raging beats by Metro Boomin. Without Warning is the blueprint for collaboration albums, and I for one cannot wait to see if this duo plans to release another project.

With Citizen ranking high on my list of favorite songs of 2017, the placement of this album on this list was obvious. Citizen is one of my favorite emo bands and after their previous work and “Jet” they should be yours too. As You Please is a welcoming followup to their 2015 album Everybody Is Going To Heaven which I enjoyed more than their previous album, YOUTH. Somehow Citizen continues to outdo themselves and produce some of the best emo music since it’s revival. As You Please is a reaffirmation of Citizen’s influence and talent in the genre whilst still leaving the door open for even further experimentation and exploration. I enjoyed every song on this album especially “Jet” and recommend it to anyone who likes emo or is at least interested in what I believe to be the best band of the emo revitalization era.

I was unfortunately late on the Brockhampton hype train, so when I did finally listen to the Saturation 2 I was astonished. This collective of 14 guys continue to break the boundaries of “boy bands” and have ushered in the new rules and regulations on how a collective should function. With each member contributing their talent it’s not shocking how well Brockhampton can function seamlessly and coherently. I chose the Saturation 2 out of the trilogy due to the differing production and lyrics. The production of the Saturation 2 is exceptionally impressive. With some of the beats sounding like they came straight from the Middle East; the creative choices make this Saturation the superior of the three. Regardless, Brockhampton has already solidified their name as one of the best boy bands of all time.

Kendrick Lamar’s fourth album simply reinforces the reasons why he is one of the best rappers of all time. A stark contrast to To Pimp A Butterfly, DAMN is loud, angry, and accessible. This album boasts nothing but hits, each one proving time and time again why it deserves to be on the album. Kendrick Lamar once again defies the norms and continues to raise the bar for himself and others.

“Kendrick further goes in-depth of his psyche, social systems and the effect of fame on his life but also the world around him with his fourth album release, DAMN. Creatively the production of the album shines due to it’s “double album” style of being able to be listened to forwards for the “weakness” side of the story and reverse for the “wickedness” side of the story, As a seamless continuation of the Good Kid, M.A.A.D City narrative of the life of Kendrick, the tone of the album is frustrated and angry at the state of the world but also reflective in how our own lives can affect the world around us. This is a statement album and should remove any doubt of who the greatest rapper on the planet is right now.” -ZiggyStarscream

Jaden Smith really surprised me with this one. When I heard SYRE was coming out and heard the trailer, I knew I would like this album, however, I didn’t know at the time that I would love it more than anything else this year. The fact that I put SYRE higher than Saturation 2 and DAMN should be enough to convince anyone to listen to this. The album soars beyond any expectations that were set for Jaden Smith and continues to amaze me each time I listen. Songs like “BLUE”, “Icon”, “Fallen”, and “George Jeff” are Jaden Smith at his best, he isn’t the greatest musician, lyricist, or rapper but he is the greatest relatable figure for myself and the youth as a collective. If you take nothing away from this list, at least give SYRE a listen, it has my official seal of approval and my praise to the highest extent. Jaden Smith won 2017 with SYRE now we can only wait to see what else he has to surprise us with in the future. 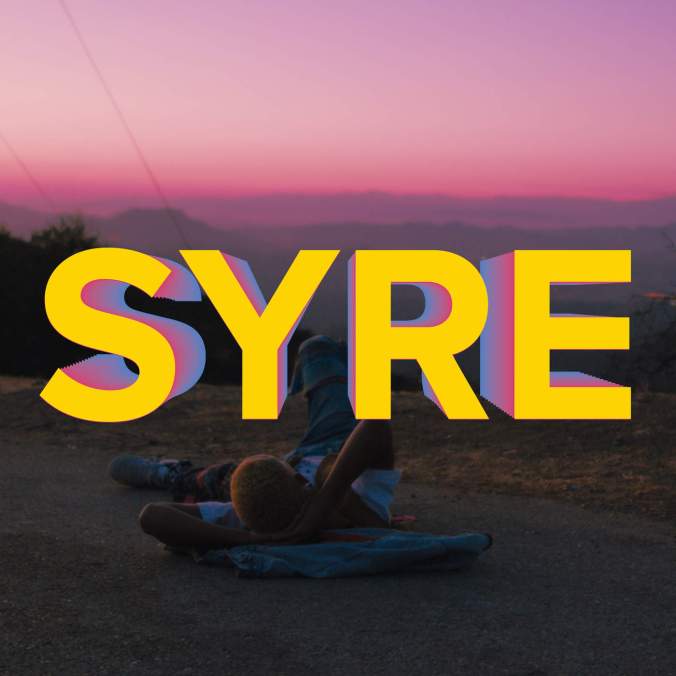